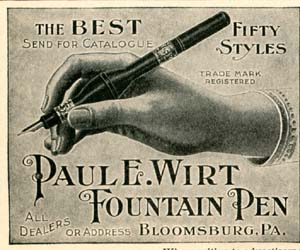 I love Paul Wirt pens. When you hold one, you can feel the quality but you will also see that this is something different, and something special.  First there is the ventless nib, maybe unmarked, or having a “W” and a wreath. You might be looking at an overfeed, which is unusual enough.  More likely you will see an underfeed with a slot in it unlike anything else you are used to.  And the pen will almost always be a hard rubber eyedropper.

Paul E. Wirt was one of the top pen makers of the early fountain pen era, starting in the mid 1880s.  L.E. Waterman and George Parker began making pens at roughly the same time, but they were nowhere nearly as well known until the turn of the century.  This was a time before self filling pens, and a time before Conkin, Sheaffer, and Wahl-Eversharp.  The Big Four (or five) innovated, marketed, and kept on top of market trends for celluloid, lever fillers, and underfeeds, which is a large part of why their companies outlasted Wirt.  Paul Wirt also innovated and marketed, but refused to follow the obvious path forward.  He only belatedly made lever fillers and celluloid pens during the company’s last gasp.

Paul Wirt began his pen factory in Bloomsburg, Pennsylvania in 1885.  He held numerous pen related patents starting as early as 1883 when he received a patent for an unusual split feed. Over the years, he had over 25 pen related patents, often for feeds, as well as a few filling mechanisms.  He vigorously defended his patents for overfeeds. Facing a challenge from another overfeed patent holder, he purchased the competing patent to strengthen his position. Before Mark Twain lent his name for Conklin ads, he had similar ads extolling the virtues of Wirt pens. In 1890s ads, Wirt claimed to have outsold other pens makers, with 350,000 pens “in use” by 1890, and over a million pens in 1893.  By the 1920s, the company was in decline. Some believe he lost interest after the death of his son, and others feel it was simply that he failed to transition to celluloid and lever fillers, and lost market share.

Paul Wirt pens can roughly be dated by the barrel imprints and feed design, to a less certain degree if it has a cone cap introduced in the mid 1900 decade.  There were no model names.  In the early hard rubber pre-lever era, features that distinguished pen models were size, bands, and chasing.  Higher end features included overlays or unusual case designs.  Each variation of size, band, chasing, etc was a different model in the catalog.

Early straight cap Paul E. Wirt fountain pens can also be recognized by the design of the section. The base of the section has a triple rope (or triple knurled) area that sits below the portion that seats the cap.  The gripping section shape is unusual in that it tapers and flares again, known as urn-shaped. The shape seems so common to us today because it is necessary for all screw cap pens to seat up against the inner cap to the end of the section and prevent leaks. But take a look at an assortment of early eyedropper pens and you will see that prior to the adoption of screw cap pens, this shape is (nearly) unique to Wirt.